Trailing the leader by six shots heading into the final round, Viktor Hovland used back-to-back eagles to separate himself from a crowded leaderboard at Albany. Playing in the Hero World Challenge for the first time, Hovland took the lead, and then extended it, when he chipped in for eagle on the 14th hole and when he then eagled the 15th hole. For Hovland, he became the third straight European to win the tournament and just the third player to win the tournament in his debut. One of the games all-time ball-strikers, Henrik Stenson powered his way to victory on the back of his 5-wood. An eagle on the par-5 15thhole gave Stenson the lead and he’d never look back. With tournament host Tiger Woods among a group of five players in contention, Stenson’s steady play, a final round 66, helped him to earn a victory at Albany. Playing in his first Hero World Challenge, Jon Rahm cruised his way to a four-shot victory in the final round. Starting the day in a three-way tie with Tony Finau and Henrik Stenson, the 24-year-old prodigy shot 7-under 65 finishing with three straight pars, becoming the first Spaniard to win the tournament. Starting Sunday’s final round trailing by seven strokes, one would think Rickie Fowler’s chances of winning were slim to none. After eight birdies on the front-nine, Fowler was in control of the touranment. His dominating performance continued on the back-nine as he set a course record 61 en route to a runaway victory at Albany. Returning for a third Hero World Challenge, Hideki Matsuyama’s substantial lead heading into the final round on Sunday helped pave his way to victory. With two holes to play, Matsuyama’s advantage was only two strokes as Henrik Stenson challenged. With a par-save on the 18th hole, Matsuyama sealed the victory, finishing at 18-under par in the tournament. When the 2015 Hero World Challenge field was announced, Bubba Watson wasn’t a part of it. After a withdrawal, Watson stepped into the field and would emerge victorious at 25-under in the Bahamas. Watson, who was never seriously challenged at the top, sailed home with a 6-under 66 for a three-shot victory at Albany, the first year the exclusive course hosted the tournament. Ending his second year as a pro, Jordan Spieth went home with two tournament records along with his victory at the 2014 Hero World Challenge. Starting the final round with a seven-shot lead, Spieth blew away an elite field when he closed with a 6-under 66. The 21-year-old from Texas turned the final round into a casual walk with a 10 stroke win at Isleworth. Trailing tournament host Tiger Woods in the final round, Zach Johnson found magic with his short irons to pull off the victory. Johnson staged an improbable comeback, rallying from four shots behind with eight holes to play. Tied on the final hole, Johnson’s second shot found the water. Needing to save par, Johnson miraculously chipped in from the drop zone to force a playoff. The underdog claimed the title with a par on the first sudden-death hole, finishing with a storybook ending at Sherwood Coming off a two-year victory drought, Graeme McDowell found success at the World Challenge. After taking the 54-hole lead on Saturday, McDowell continued his breakaway victory with a series of birdies and wrapped things up in style with a birdie on the final hole to finish 17-under for the weekend, winning for the second time in three years. A dominant performance on the greens helped tournament host Tiger Woods once again find the top spot at Sherwood. Posting back-to-back birdies on the 10th and 11th holes, Woods shot 3-under on the day, and 10-under for the tournament. A birdie on the 18th hole completed Woods comeback to win by one stroke at Sherwood. Capping off his best year on the PGA TOUR, Graeme McDowell had a performance of a lifetime against tournament host Tiger Woods. After overcoming a 4-shot deficit, the Northern Irishman holed a 20-foot birdie putt on the final hole to force a playoff against Woods. McDowell mirrored his effort on the 72nd hole of regulation and rolled his long birdie putt home for a comeback win in the tournament. Ending a 28-month winless streak, Jim Furyk held off a strong field to win the World Challenge. Furyk, who started the day two shots behind the leader, sank key puts on the final two holes, closing five-under-par to reach 13-under to win by one stroke at Sherwood Country Club. Rounding off a memorable PGA TOUR season, Vijay Singh claimed the World Challenge. With the stage set for the final round duel, the veteran golfer sank a birdie putt on the final hole to secure the win. Singh used a five-under-par round to help earn a one-shot victory. Ending a remarkable year, tournament host Tiger Woods became the first player to win back-to-back World Challenges. The world’s top-ranked player began the day with a six-shot lead over his closest competitor and kept his lead sizable on the back nine as he played the final nine holes at 4-under-par. Woods defended his 2006 title with a record-equaling total of 22-under-par. Starting Sunday’s final round one shot behind the leader, tournament host Tiger Woods made his comeback quickly. Sinking a 10-foot birdie putt at the par-5 second hole, Woods followed that with a chip-in birdie on the third. Woods finished with a 6-under 66 on Sunday to earn his third World Challenge victory. Claiming his first victory in four years on the PGA TOUR, Luke Donald won big at the World Challenge. Donald matched the record for best closing round by a winner as he posted an 8-under par round on Sunday. The 28-year-old couldn’t get his final putt to drop on the 18th green, but his par was enough to take home the victory at Sherwood Country Club. Tournament host Tiger Woods held off an elite field to win the World Challenge for a second time. Woods took control of the tournament during the final round, missing only two fairways and one green and closing with a 5-under 66 for a two-shot victory. Holding off a dramatic comeback by tournament host Tiger Woods, Davis Love III won the World Challenge, his second victory in tournament history. Love pulled away from the Woods and the rest field thanks to a 45-foot birdie putt on the 16th hole. 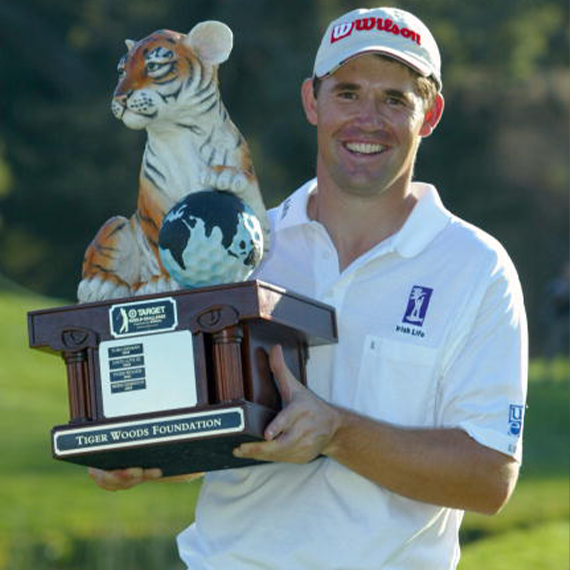 Leading by two shots heading into the final round on Sunday, Padraig Harrington took home the World Challenge victory. With tournament host Tiger Woods not far behind, Harrington played the final four holes without a mistake to put the tournament out of reach, finishing one-under-par on the round for a two-stroke victory. In the final tournament of his season, host Tiger Woods finished with a victory at the World Challenge. Down by four strokes at the turn, Woods converted five straight birdies to blow by the elite field. Woods tied the course record at Sherwood Country Club with an eight-under-par en route to a three-stroke win. Starting the final round four shots behind the leader, Davis Love III went home with a victory. After struggling on the greens in the third round, Love rolled in a 10-footer for eagle on the 11th hole, then sank another 10-footer for birdie on 15. Love wrapped up a bogey-free round to finish the tournament at 22-under, good enough for a two-stroke victory at Sherwood Country Club. Breaking his four-year tour victory drought, Tom Lehman rallied to win the inaugural World Challenge. Lehman birdied five of the final six holes to finish 13-under despite the rain and hail-soaked Grayhawk Golf Club course to win by three strokes. To this day, the hail-covered course remains one of the more iconic moments in golf history.